It’s funny because a lot of love songs are written from men professing their undying love and appreciation for the woman they love. Us as women love these songs (I’m not so big on mushy songs anymore) and usually we change the words from the feminine context to masculine context to sing these songs either in our heads our aloud to the man we love.

Don’t act like you don’t get what I’m saying here…a song comes on, romantic and slow, you picture him in your head, you think of him in every context the singer sings you either sing your heart out when nobody’s looking or sing along in your love filled dream state visions of Him hazy in your head.

Thing is I see Her, just as the singer describes her. Infinitely beautiful, loyal, loving, intelligent, dedicated, sensual, sexual, whatever he’s singing about her that’s so deep and romantic I see “Her” in my head. She dances to the music in her flowing dresses, skin glowing in the sun, her smile capturing me and creating the beautiful music in the background of her hazy glow. I’m mesmerized, hopelessly in love and I’m singing my heart out to Her.

That’s how I know I’m bisexual. I’m hoping she’ll jump out of one of those visions in my head and somehow miraculously stand right in front of me…and smile…even though she can see my wedding ring.

Hey, if you like you can go watch video I.
Honestly I didn’t but this video is great. She makes some wonderful points.

In New York countless tourists fly in from around the world during the month of June for Pride events. Pride events range from parties and galas to fundraisers, benefit balls and 5k runs, parties in the streets and on The Piers.

Our annual Pride Parade according to http://www.hopinc.org over 1 million people attend the New York City Lesbian, Gay, Bisexual & Transgendered March; over 350,000 people attend Pridefest; and a total of 15,000 people attend Rapture on the River and the Dance on the Pier.

Pridefest, Rapture on The River and Dance on The Pier are events some people spend all year preparing for. It’s a LGBT holiday month!

We are not gay, we are not lesbian, we are not transgender, we are bisexual. We are the B in LGBT but it seems we are an afterthought in the LGBT community in many circles.

Although in recent years we have gotten more exposure we still aren’t easily identifiable, we don’t act a certain way, look any different than heterosexual and people-some of us are even in “hetero” appearing relationships.

We “pass” in society without a second glance, we don’t struggle like our brothers and sisters in the community…right? We don’t even have to participate or acknowledge Pride month, right?

Many bisexuals aren’t immersed in the LGBT community because we can lead “straight” lives and continue on undetected through life. We never have to come out if we don’t want to. We don’t have to march behind banners declaring our independence, we don’t have to wave flags, wear rainbows and tell the world we’re awesome because we’re strong and fierce!

We can keep sleeping with our best friend, neighbor, roommate, co-worker, secret lover without having to tell the world. We can keep up our hetero lives without ever disclosing our true self to the world by waving rainbows in June.

But is that true? Is the fight ‘theirs’ not ‘ours’?

I tend to think not…

I marched every parade when I was a baby and every parade I could on my own. I went through a moral/spiritual struggle within myself and haven’t marched in many years. I don’t necessarily agree with some of the costumes & behavior of some people at some of the events and at the parade which was a deciding factor in not attending for as long as I have.

When I first started attending I was passionate and serious about ‘the movement’. This parade has always meant solidarity, strength and standing tall despite the odds to me.

When I learned the story of Stonewall I literally cried for my ancestors who did have to hide and fight for the right just live peacefully among the rest of the city. I was a child living in a world that hated who I knew I was and it was my fight too.

It was my generation(90’s baby’s) that carried the post 80’s  torch of the “Silence=Death“campaign (the HIV/AIDS awareness movement) the public safety outreach keeping our streets safe (Who’s streets? OUR streets! was our war cry, lol), LGBT Youth joined forces, and even the issue of LGBT homelessness and prostitution was being addressed.

The pioneers built the foundation and our generation was bold enough to continue the fight. “Out Loud & Proud” generation was mine. We wore our flags, our triangles, our lavender, rainbows and we wore them despite what the world thought of us, the danger we put ourselves in and the ridicule we got from strangers.

My generation and the generations before mine, our voices, our footsteps, volunteer hours, outreach, campaigning, marching, organizing & recruiting efforts all played a part in where we are today.

Although I haven’t marched since probably 2001 this month still holds a dear place in my heart.

Many of us have died for the freedoms we have today. Google 80’s & 90’s and Gay Bashing in NYC. It was horrible. We were terrorized and we didn’t back down.

We earned the freedom we have today to live out loud. You can label yourself gay, straight, bi, trans, pan, metro, whatever orientation you choose today, and declare that out loud. 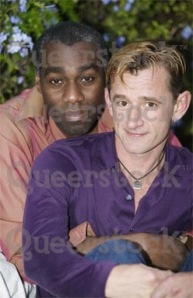 My husband and I are marching this year behind the BiRequest banner.

I’m doing it for my husband, so he can see what the LGBT community is about on the inside, why the community is so dear to me and why a part of me will always be a part of this community.

We are still in the first 5 years so we’re sharing and exploring a lot with each other. This is something I think he needs to experience and he’s all for it. 🙂 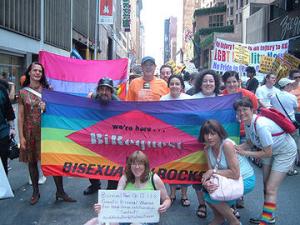 Hopefully I’ll meet “Her” during my husband’s tour of Pride month NYC. That would be nice…

Although I don’t wear LGBT gear anymore I may throw on a rainbow ring or bi pride necklace from time to time still and hubby understands. 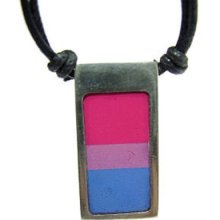 Those are some of the many reasons why Pride month means a lot to me, and should to you too. It IS LGBT Pride month. The B  for Bisexual is included. 😉

So, I had an idea, one that made a lot of sense.

I put it together and here it is. A place for bisexual wives.

Where are they? I don’t know. We’re not hiding, we just aren’t easily seen.

I don’t want to make blogging about bisexuality into a major part of my life. I don’t want to be  some big bisexual literary star. I just want to get women all over the world together to support each other through this difficult life of ours.

I think too much. I’m not the only one. You are here-so am I. Point proven. If we didn’t think deeper I wouldn’t be blogging about it, you wouldn’t be here reading about it.

Bear with me while I cultivate this idea here. It’s not going anywhere, I’ll post regularly. I promise to keep it interesting as I can and post content you guys will enjoy.

The issue is I want this to be interactive. I want to read your comments, thoughts, stories and issues. I want you guys to connect. I want to connect with you.

The BiWives Club will have tons of great activities and meetups, stay tuned for membership details.

Thanks for visiting BiWifeLife…more great content on the way!

We are the over 150 lesbian, gay, bisexual and transgender US Naval Academy Alumni and their supporters. Most of us never had any role models of other LGBT Alumni who served before us, although they were there, serving in total silence. We are here for all to see, including the LGBT midshipmen and alumni who are currently serving on active duty, their families and confidants.

A wealth of resources for bisexual, bi questioning and bi friendly people.

Update: My husband and I attended a BiRequest meeting in Manhattan yesterday (Thursday June 6th) and I must say it was refreshing.

We were a widely diverse group in age, race, relationship status but we all shared one thing in common. Dealing with our bisexuality. The topic discussion was on Bisexuality and Familial relations.

We look forward to attending meetings in the future.

It’s a great resource for those who would like a place to discuss bisexuality in a judgement free and supportive setting.

A place to meet, identify and connect…